​Born out of a time in recent Cayman history where the nation was thriving and enjoying the prosperity that it had worked so hard for, what emerged was a very influential period for aspiring artists. Cayman’s economy and people were flourishing, and this ignited a movement for artists to embrace the creative freedom and space to make pieces that inspired them. Instead of coming from a place of desperation, need, anxiety or rebellion, this period (which continues to this day as Cayman becomes even more prosperous), has designed a rich and abundant playground for artists to feel inspired and confident to share their work. The resort is the happy and grateful recipient of these artists’ work.

With the direction and guidance of art advisors Sweeney Co, the designers Champalimaud and the National Gallery of the Cayman Islands, what is showcased in our public areas are a representative and inclusive selection of Caymanian artists with a diverse range of mediums.

Not all the artists featured here were born in Cayman (although many of them were) but all of them have lived here for many decades and now all Cayman their forever home.
John Bird
For this collection of sprouting coconut sculptures, the artist treated the wood using the Japanese method of Shou Sugi Ban where the cedar is burned to create a deep resilience in the wood. This is representative of the Caymanian people who were carried here, as the coconuts were, by ocean currents from faraway lands. Over time, this resilient nature evolved into prosperity and bounty, forming the diverse and thriving nation that exists today.

Furniture designer and expert woodworker, John Bird practiced as a craftsman in the UK and Canada before he visited the Cayman Islands for the first time in 2004 to aid in rebuilding the country after Hurricane Ivan. Since then, he has called Cayman his home for more than 15 years. John’s focus is to create designs that embrace the environment, which reflect a wide range of styles from contemporary to traditional. He is grateful for all the interesting opportunities that that he has been involved in and credits Cayman as the reason why he has thrived in his career. This place has given him the creative freedom and artistic license to pursue projects that he is passionate about.
David Bridgeman
This piece depicts fluidity and movement. The blend of bold tones and geometric shapes evoke a sense of travel, orbit, and exposure to all the diverse colors and nuances that the world has to offer. This can be seen as representative of the mosaic of cultural identities found in the Cayman Islands.

David Bridgeman was born in England and moved to the Caribbean in 1987 where he developed his love for the visual arts. Studying under Caymanian and British masters, he developed his own style, blending his background in Biological Science into his contemporary compositions. David tells the story of his work as a collection of experiences, using grids or ‘nets’ as a metaphor for catching elements in his art, memories and dreams. His art typically demonstrates bright and bold colors.
​Randy Chollette
The Cayman sky and sea meet with an explosion of color that radiates the sunset. The interplay of strong blue and yellow tones emanates luminosity and moves the viewer between realism and imagination. Nature is interwoven with timelessness as a single sailboat gracefully glides through the still ocean. This is the place that time forgot.

Randy Chollette is a self-taught Caymanian artist whose work is deeply influenced by his Rastafarian beliefs and Caymanian heritage. Randy’s grandfather and uncle were artists as well, painting on the same porch that Randy paints on today. A member of the Native Sons Collective, a group of Caymanian artists, Randy’s work illustrates a mix of realism and abstract. He is passionate about the environment, traditional Caymanian homes and landscapes. His work bursts with the meaning of connection and togetherness, as demonstrated in his mosaic and stained glass pieces. Randy describes his work as “everything is alive.
Davin Ebanks​
A wave of rippling blue, this sculpture offers a sensory escape in the midst of the Caribbean Sea. The national identity has always been intrinsically connected to the surrounding ocean. This piece is symbolic of the Cayman spirit – curious by nature and seafaring adventurers by design.

Davin Ebanks is a third-generation Caymanian sculptor. He is passionate in working with the medium of glass to illustrate the rich culture, history and environment present in the Cayman Islands. With a close tie to seafaring through his grandfather, Davin draws inspiration from the shades of blue surrounding the Cayman Islands and how the color blue has connected people from across the globe for centuries.​
John Reno Jackson
Abstract forms in earthy colors create a warm and golden quality mimicking the natural light of the Cayman sunshine. A kaleidoscope of shapes blending together evoke a feeling of community and interconnectedness while the closeness of the abstract figures offers a sense of belonging and kinship.

John Reno Jackson, born in Grand Cayman, is a self-taught interdisciplinary artist. John works with both representational and abstract art, using paint as his primary practice – his paintings are generally comprised of 10 to 20 layers of paint. John’s work reflects current and historical situations in the Cayman Islands, noting that “the subject matter engages with Caribbean life in an illusory manner.” His work illustrates a strong pull to the environment, as John examines how both humans and nature affect art. ​
​Charles Long
This collection of scenes captures the joy and playfulness of everyday life in the Cayman Islands, portraying a haven of harmony, connection, and collective spirit. It depicts the colorful diversity of daily life and is representative of a mosaic in unison.

Born in West Africa in 1948 and originally from England, Charles Long is known as a “chronicler of our times.” Charles and his family moved to Grand Cayman in the 1960s where Charles’ father became the first governor of the Cayman Islands. His art captures everyday scenes of the quickly evolving Cayman Islands. He currently paints in a studio his father helped him build, and is best known for the bicycle elements in his art
​Ren (Renate) Seffer
A mosaic of bright colors and vivid shapes, this painting captures a traditional scene of a fisherman holding his catch amongst an abundance of mangroves. This piece offers a sense of humble grounding, and a deep connection with nature while the bright palette evokes a fundamental optimism and innocence.

Born and raised in Australia, Renate (Ren) Seffer moved to the Cayman Islands in the 1990s after purchasing a one-way ticket during her backpacking travels. A third generation self-taught artist, Ren is known for her vibrant paintings full of Caymanian charm. Her unique style is self-coined as ‘Island Whimsical’ full of bold color and imagery.
Gordon Solomon
Depicted are a collection of vignettes of nature, hard work and everyday life in the Cayman Islands among the sea and towns. These pieces speak of Caymanian identity, the nation’s seafaring history and is a nod to the dedication, strength and resilience which has helped make these islands thrive.

Gordon Solomon is a painter and musician born in Grand Cayman. He is a member of the Native Sons Collective and his work is primarily focuses on Caymanian heritage. He finds inspiration in his surroundings – in towns and by the sea, boats, and everyday life. “Ordinary people engaged in often extraordinary trials, soothed and made sacred by the power of brush and paint.” 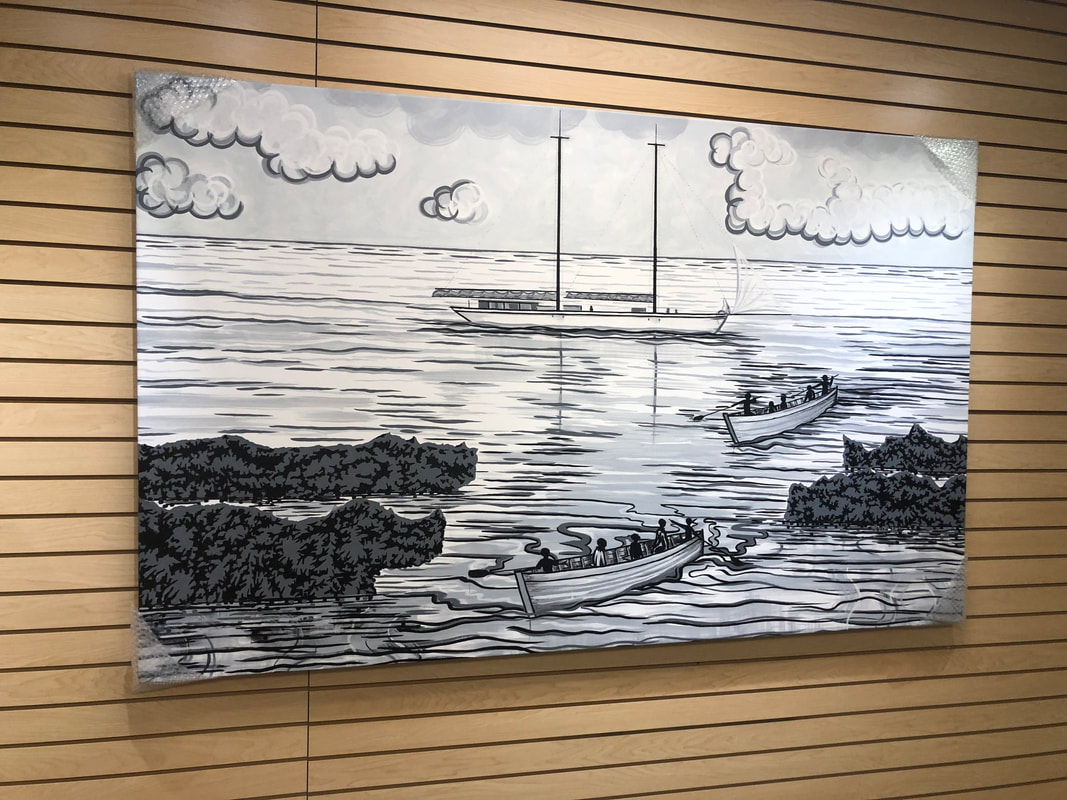 Avril Ward
Silver thatch palm tree fronds in periwinkle hues move gently with the warm Cayman breeze against a peaceful backdrop of clouds and blue sky. Under the shade of these leaves, there is a haven of harmony and connection. Beauty can be found in nature, even in the shadows.

Avril Ward is a self-taught artist born in Scotland, raised in South Africa, and living in Grand Cayman since the early 2000s. She works in many mediums including paper, canvas, and sculpture. She credits her time as a professional contemporary dancer as a powerful introduction to arts, exploring creative realms through movement and expression.
Teresa Grimes

With fluid energy, this piece captures the intangible effect of light upon landscape. The dynamic interplay between shadow and light creates an intimacy and liveliness that takes the viewer gently down a water way surrounded by flourishing mangroves. It offers a sanctuary, a sense of peace and a moment of quiet joy.

Teresa Grimes moves to the Cayman Islands in 1986. She paints in the Old Masters style, with a preference for painting ‘en plein air’ – painting spontaneously outdoors. She believes that this impulsive approach prevents any artificial planning or composition, forcing her to capture the freshness of the light which, in turn, defines her style.
Julie Corsetti & US Art House
​
Images of bright silver thatch palm tree leaves are juxtaposed with stormy ocean waters while being overlayed with geometric shapes in gold leaf illustrating a contrasting scene of light versus dark. These are deep-rooted elements within the environment in the Cayman Islands, yet this piece highlights the sacred geometry in nature, which can simply be discovered in the safety and familiarity of one’s everyday surroundings.

Hailing from the US and based in the Cayman Islands since 1994, Julie Corsetti has been a revered photographer for the past 20 years. Julie is enamored with the underwater world and is best known for her turquoise blue photographs that perfectly depict the breathtaking scenery found in the Cayman Islands. Julie’s company Deep Blue Images, a reflection of her love of diving, is often seen capturing memories at wedding and family photoshoots. However, in 2020, she expanded her passions and creativity by focusing on a more artistic style of photography, while also collaborating with other artists.
​Simon Tatum
Inspired by early tourism brochures from the 1950s, this photomontage series illustrates the dream of getting away to discover paradise while also offering a glimpse into predictable and traditional Cayman elements. Just like how the islands have evolved over the last few decades, these pieces reflect how the nation has embraced diversity and global influences, which has given rise to a new, unique Caymanian culture.

Born in Grand Cayman, Simon Tatum’s work demonstrates a strong tie to advertising through collage. He believes that “advertisements are a way of dreaming.” He is passionate about imaginary spaces, and the development era in the Cayman Islands, just as tourism came to life.